Like us on Facebook, follow us on Twitter! Check out our new tumblr page. :)
Manga News: Toriko has come to an end; but be sure to swing by and share your favourite moments from the series!
Manhwa & Manhua News: Check out the new Manhwa and Manhua shout-out (March 2016).
Event News: One Piece Awardshas concluded. Check the results Here!
MangaHelpers > Manga > Browse > Taishou Yakyuu Musume
Home
Chapters
Translations
RSS 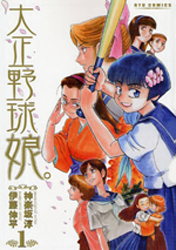 In 1925, after being told by a baseball player, that women should become housewives instead of going to school, two 14-year-old Japanese high school girls named Koume and Akiko decide to start a baseball team in order to prove him wrong. During this time, when even running was considered too vulgar for women, baseball is known as "what the boys do" and they face many difficulties when having to find enough members, to get permission from their parents and also when learning about the sport itself.

Apart from baseball, the series also shows a different side of Japan rarely seen in anime. For example, the popular sailor school uniforms are introduced as western style clothes during the Taisho period.