Like us on Facebook, follow us on Twitter! Check out our new tumblr page. :)
Manga News: Toriko has come to an end; but be sure to swing by and share your favourite moments from the series!
Manhwa & Manhua News: Check out the new Manhwa and Manhua shout-out (March 2016).
Event News: One Piece Awardshas concluded. Check the results Here!
MangaHelpers > Manga > Browse > Takujou no Ageha
Home
Chapters
Translations
RSS 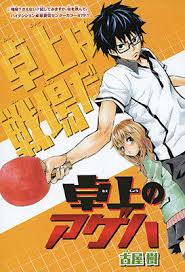 Ootsuka Ririka is a cute teenage girl that is loved by all the boys at school, though she still hasn't chosen one as a boyfriend. Her one secret is that her grandfather runs a ping-pong center that he wants her to inherit. Ririka doesn't play ping-pong, and honestly isn't interested. Then one day, transfer student Hanazono Ageha arrives from Germany, where he has been practicing ping-pong. He is interested in ping-pong above all things, and is shockingly uninterested in lovely Ririka.

It turns out that he is coming to train under her grandfather, who is one of the former great 13 Japanese world champions, and he is hoping to defeat the teenagers trained by the other champions. Ririka's grandfather has another plan--that Ririka and Ageha will get married and carry on the family's ping-pong tradition. After seeing him play ping-pong intensely, Ririka does have interest in Ageha, and Ageha at least recognizes Ririka's beauty. Will her grandfather succeed in pushing them together? [tethysdust]