Like us on Facebook, follow us on Twitter! Check out our new tumblr page. :)
Manga News: Toriko has come to an end; but be sure to swing by and share your favourite moments from the series!
Manhwa & Manhua News: Check out the new Manhwa and Manhua shout-out (March 2016).
Event News: One Piece Awardshas concluded. Check the results Here!
MangaHelpers > Manga > Browse > Violence Jack
Home
Chapters
Translations
RSS 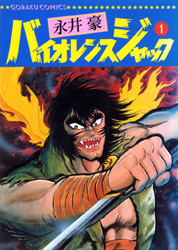 The series takes place in a world destroyed by a devastating earthquake in which the remnants of humanity are divided between the strong and the weak. Violence Jack is uncovered amongst the rubble and demolished granite by the inhabitants of this city where he is let loose upon them until he finally confronts the most ruthless of all the warlords, the Slum King.