Like us on Facebook, follow us on Twitter! Check out our new tumblr page. :)
Manga News: Toriko has come to an end; but be sure to swing by and share your favourite moments from the series!
Manhwa & Manhua News: Check out the new Manhwa and Manhua shout-out (March 2016).
Event News: One Piece Awardshas concluded. Check the results Here!
MangaHelpers > Manga > Browse > 090 - Eko to Issho.
Home
Chapters
Translations
RSS 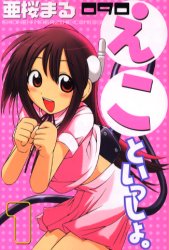 Hiroshi found a broken cellphone on the street and went to a shop to get it fixed. When it got delivered to his home, he got a life-sized girl instead but it is still a cellphone. Hiroshi only wants a normal cellphone that he can brag to his classmates but he can't return this one because of the expensive return fee written in the purchase contract. This is how Hiroshi discovers the advantages and disadvantages in life of owning a cellphone-girl, which he named Eko.