Like us on Facebook, follow us on Twitter! Check out our new tumblr page. :)
Manga News: Toriko has come to an end; but be sure to swing by and share your favourite moments from the series!
Manhwa & Manhua News: Check out the new Manhwa and Manhua shout-out (March 2016).
Event News: One Piece Awardshas concluded. Check the results Here!
MangaHelpers > Manga > Browse > 2 HEARTS
Home
Chapters
Translations
RSS 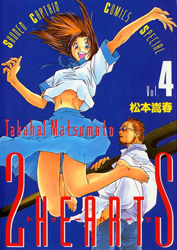 Sakaki Ayaka is a freshman girl with the ability to break things by using resonant vibrations. She's mostly been able to carry on with a normal high school life, though occasionally things happen around her that make people think she's kind of weird. Lately, though, she's started hearing voices!

The voice in her head, belonging to a legendary giant tuning fork that wants to aid her, tells her of the incredibly powerful Keymaster, and that with some practice she could be very powerful herself! In some way, her new teacher appears to be mixed up this as well. What kind of situation has Ayaka been dragged into? And with all this going on, will she be able to keep her classmates from deciding that she's completely insane?
[tethysdust]