Like us on Facebook, follow us on Twitter! Check out our new tumblr page. :)
Manga News: Toriko has come to an end; but be sure to swing by and share your favourite moments from the series!
Manhwa & Manhua News: Check out the new Manhwa and Manhua shout-out (March 2016).
Event News: One Piece Awardshas concluded. Check the results Here!
MangaHelpers > Manga > Browse > Dive in the Vampire Bund
Home
Chapters
Translations
RSS

Dive in the Vampire Bund 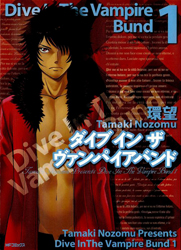 Vampire Bund is the world’s only island metropolis for vampires that boasts a huge population of 100k plus. Teenager Akira Garcia Fujisaki follows his friend Masaki, who chooses to become a vampire, to Vampire Bund. Akira gets caught in a complication and gets bitten by vampires along with his friend. Akira soon finds himself captured and forced to complete a mission to steal some products and where he finds a teenage girl named Ruli who was also bitten and has been sold to human trafficking. Free from their captors, Akira and Ruli soon learn that humans are transformed into vampires through a virus that rewrites the human gene into a vampire gene during a 48 hour process. However, there is a vaccine to the transformation process which ironically was the product that Akira was forced to steal earlier. With 30 hours left before the transformation is complete, will Akira and Ruli be able to retrieve the vaccine before they permanently turn into vampires? [vyc]

Sequel to Dance in the Vampire Bund.

Its already a sequel? Cool Akira should have master Werewolf and Vampire powers. Permalink " "