Like us on Facebook, follow us on Twitter! Check out our new tumblr page. :)
Manga News: Toriko has come to an end; but be sure to swing by and share your favourite moments from the series!
Manhwa & Manhua News: Check out the new Manhwa and Manhua shout-out (March 2016).
Event News: One Piece Awardshas concluded. Check the results Here!
MangaHelpers > Manga > Browse > Abarenbou Shounangon
Home
Chapters
Translations
RSS 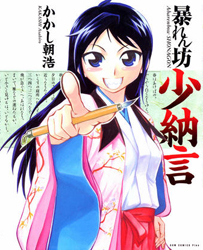 The Heian Age started in the year 794 when Emperor Kanmu moved the capital to the city of Heiankyo and the peaceful age lasted nearly 400 years. In the year 994, a girl named Sei Shounagon is summoned by Princess Chuumiya to serve under her as a poet. Shounagon is a language expert and works directly under the princess to entertain and teach cultural literature to her. How well Shounagon does in her poetry has a direct influence on how the princess is perceived by the rest of the royalty and thus is a very important job. Shounagon initially struggles to fit in with the group but as she begins to show how much of a poetic genius she is, Shounagon starts to get accepted by others. [vyc]