Like us on Facebook, follow us on Twitter! Check out our new tumblr page. :)
Manga News: Toriko has come to an end; but be sure to swing by and share your favourite moments from the series!
Manhwa & Manhua News: Check out the new Manhwa and Manhua shout-out (March 2016).
Event News: One Piece Awardshas concluded. Check the results Here!
MangaHelpers > Manga > Browse > Advance Of Z: The Flag of Titans
Home
Chapters
Translations
RSS

Advance Of Z: The Flag of Titans 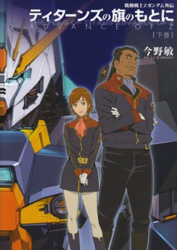 Manga adaptation of the photonovel of the same name. Advance Of Zeta is probably one of the most important Gundam manga of the last years. The story follows the Titans Test Team, Black Otter Team, on their mission to test new mobile suits for the Titans. It begins with Eliard Hunter, an Earth Federation mobile suit pilot being assigned to the Titans and transfering to the Aswan, an Alexandria class carrier. There he meets Carl Matsubara, another new Titans recruit, Audrey April a skilled pilot and chief of test operations and data gathering, and Wes Murphy, a vetern of the One Year War and the Delaz Conflict. The Black Otter team doesn’t just carry out test runs, it also participates in real combat missions against Zeon Remnants and later, against AEUG.