Like us on Facebook, follow us on Twitter! Check out our new tumblr page. :)
Manga News: Toriko has come to an end; but be sure to swing by and share your favourite moments from the series!
Manhwa & Manhua News: Check out the new Manhwa and Manhua shout-out (March 2016).
Event News: One Piece Awardshas concluded. Check the results Here!
MangaHelpers > Manga > Browse > All You Need Is Kill
Home
Chapters
Translations
Thread
RSS

All You Need Is Kill 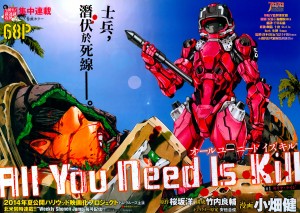 The world is in a war against an alien race called "Mimics," who have taken over most of the world with a mission to eliminate the human race. Keiji Kiriya is a new recruit in the United Defense Force, which is battling against these "Mimics." On his first day of deployment, Keiji and his unit encounter "Mimics" and are all killed... Or was it all a dream? For some inexplicable reason, after every time he dies, he is resurrected and returned back to the day before the battle. Why does this happen to Keiji and how can he escape from this never ending cycle? [c_k]

--------
Note: Based on the light novel, with the same name, by Hiroshi Sakurazaka with illustrations by Yoshitoshi Abe, which was originally published in 2004 and then translated and released by Viz in 2009.

The manga was complete at 17 chapters.

Really good manga and a story really different of what we're used to see in most of mangas. And I just discovered that Hollywood take his idea from mangas : A movie called "Edge of Tomorrow" is in production and it's the same story. So unless both the manga and the movie come from the same thing the movie probably stole the manga idea. Permalink " "