Like us on Facebook, follow us on Twitter! Check out our new tumblr page. :)
Manga News: Toriko has come to an end; but be sure to swing by and share your favourite moments from the series!
Manhwa & Manhua News: Check out the new Manhwa and Manhua shout-out (March 2016).
Event News: One Piece Awardshas concluded. Check the results Here!
MangaHelpers > Manga > Browse > RRR
Home
Chapters
Translations
Thread
RSS 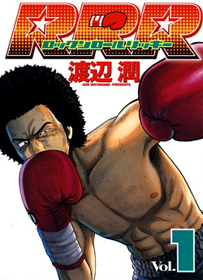 Rikitaro is a musician whose dream is to become a rock star just like Jimi Hendrix or Jim Morrison, but at the age of 27 that dream is fading away rapidly. Ooishi is a 3 time world boxing champion who recently retired and is now in the entertainment world, shooting a boxing reality show. These two unlikeliest of people cross paths one day but both of them think nothing of it until weeks later. Rikitaro is given one last shot by a record label to sign a deal but before that, they need him to get into better shape so that he is easier to sell. He stumbles upon a boxing gym which also happens to be the same gym Ooishi is filming his show. As fate’s wheels start to turn, neither man realizes that they will work together to train the best boxer ever, even better than Ooishi himself. [vyc]