Like us on Facebook, follow us on Twitter! Check out our new tumblr page. :)
Manga News: Toriko has come to an end; but be sure to swing by and share your favourite moments from the series!
Manhwa & Manhua News: Check out the new Manhwa and Manhua shout-out (March 2016).
Event News: One Piece Awardshas concluded. Check the results Here!
MangaHelpers > Manga > Browse > Vagabond
Home
Chapters
Translations
Thread
RSS 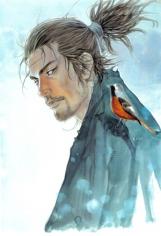 Striving for enlightenment by way of the sword, Miyamoto Musashi is prepared to cut down anyone who stands in his way. Vagabond is an action-packed portrayal of the life and times of the quintessential warrior-philosopher--the most celebrated samurai of all time!

The best manga ever made. The story is intriging, the violence is intense, and the romance (what little of it ) is wonderful. Top notch drawing-which would explain why we get so little in updates. But when they come...wow. Breathtaking scenery, I love the water color pages and just simply how Takezo & Co. are drawn. A must read for older age readers. Permalink " "
Review by Tanequil

Some seinen manga, I believe, take the meaning too far. The gore and nudity found in them is simply disturbing, no longer artistic, just omnipresent and absolutely in-your-face.

From the beginning, Vagabond has this strange allure to it. Drawn to this manga by the promise of awesome fight scenes, [oh yes, I assure you, you will not be disappointed by the fight scenes], you find yourself hooked to this manga.

It starts off with a rather rude and yet beautiful jerk, depicting the scene of a battlefield in splendid watercolor. The manga just rides on from there, rising from peak to peak. The fights get better, and the character himself grows. He grows realistically, he stumbles, he falls, he falls so hard that he finds it difficult to get back onto his feet, he takes the wrong path, goes the wrong way, makes the wrong enemies, and kills the wrong people, but he gets back up, and the story continues.

It is just so completely believable, so persuasive and so artistic all at the same time that with this manga just feels so raw and yet so real.

The main character, who one will find it hard to identify with on the surface, has something deep within him that every single one of us can possibly understand and aspire towards.

His growth and development, in more ways than just of the sword, but yet at the same time never truly leaving the sword, are so simple and yet so spectacular at the same time. He manages to bring out the best in some people and the worst in others, brushing past some like a whirlwind and crashing headlong into others, leaving behind a trail of death, destruction, and new life. All this happens while he himself is still growing, and while he is nowhere near perfect, there is just something so addictive about getting to know more about him.

With a brilliant blend of flashbacks, flashforwards and glimpses into the lives of others besides those who surround the main character, Vagabond paints a rich picture of the samurai scene in the time of Miyamoto Musashi, the main character.

If you have been hesitating about reading a seinen manga, hesitate no more.

Vagabond will open your eyes to a brilliant new genre. Permalink " "
Review by Lee132

One of the Best Manga there is SERIOUSLY you cannot go wrong here you just get caught up in a lot of seriously epic feelings when you read this sometime you think about crying and other times you just wanna SCREAM how epic this manga is, its based on a Sword Saint (how cool does that sound?? :P) who seriously kicks ass with bits of wood (bcoz he can :P XD) epic stuff!! MUST READ Permalink " "