Like us on Facebook, follow us on Twitter! Check out our new tumblr page. :)
Manga News: Toriko has come to an end; but be sure to swing by and share your favourite moments from the series!
Manhwa & Manhua News: Check out the new Manhwa and Manhua shout-out (March 2016).
Event News: One Piece Awardshas concluded. Check the results Here!
MangaHelpers > Manga > Browse > Angel Fake Nisemono Tenshi
Home
Chapters
Translations
RSS 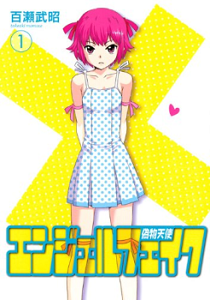 The Tsukiboshi family has been known throughout the generations for their forward thinking inventions. The youngest inventor of the family is Rikuma, a technology genius who has created countless innovations in his young lifespan. Rikuma receives a gift from his grandfather: the will of Kyunosuke, his ancestor who was the first and best inventor of the Tsukiboshi family. With his two sisters Misato and Miku, Rikuma travels to the so called mansion left in the will. Inside the mansion that literally appears out of thin air, they find a female android prototype named Setsuna. When Rikuma accidentally activates Setsuna, he is unwillingly sent on an adventure to protect the planet from invasion and destruction. [vyc]