Like us on Facebook, follow us on Twitter! Check out our new tumblr page. :)
Manga News: Toriko has come to an end; but be sure to swing by and share your favourite moments from the series!
Manhwa & Manhua News: Check out the new Manhwa and Manhua shout-out (March 2016).
Event News: One Piece Awardshas concluded. Check the results Here!
MangaHelpers > Manga > Browse > Antique Bakery
Home
Chapters
Translations
RSS 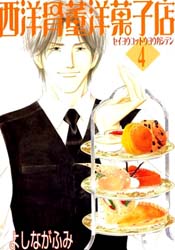 Keiichiro Tachibana has recently quit his job and opens a patisserie with his father's help. His father then brings a top-notch patissier, Yusuke Ono, to work for the patisserie. It turns out Yusuke is a gay high school classmate of Keiichiro's and the one Keiichiro deeply hurt by blatantly rejecting his affection. Keiichiro feels a bit awkward working with him at first, but Yusuke has long been over the heartache.
With the addition of a pastry-loving ex-boxer, Eiji Kanda, and Keiichiro's childhood friend, Chikage Kobayakawa, the story of this seemingly bizarre patisserie unfolds.