Like us on Facebook, follow us on Twitter! Check out our new tumblr page. :)
Manga News: Toriko has come to an end; but be sure to swing by and share your favourite moments from the series!
Manhwa & Manhua News: Check out the new Manhwa and Manhua shout-out (March 2016).
Event News: One Piece Awardshas concluded. Check the results Here!
MangaHelpers > Manga > Browse > Chihayafuru
Home
Chapters
Translations
Thread
RSS 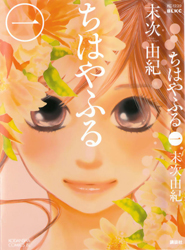 All her life, Chihaya's dream has been to watch her model sister become Japan's best--well, until a quiet, unassuming transfer student named Arata tells her otherwise. He explains to her that a dream is something she needs to work at herself. They play a competitive game of a traditional Japanese card game known as Hyakunin Isshu in a way Chihaya has never seen before. After taking Arata's place in a game, Chihaya discovers she has a passion for it and wants to become the "Queen" of Karuta, number one in the world.