Like us on Facebook, follow us on Twitter! Check out our new tumblr page. :)
Manga News: Toriko has come to an end; but be sure to swing by and share your favourite moments from the series!
Manhwa & Manhua News: Check out the new Manhwa and Manhua shout-out (March 2016).
Event News: One Piece Awardshas concluded. Check the results Here!
MangaHelpers > Manga > Browse > 3-gatsu no Lion
Home
Chapters
Translations
Thread
RSS 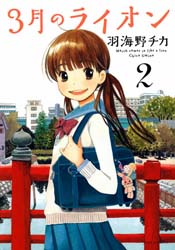 Kiriyama Rei is a 17-year old professional shōgi player and very good at it, but in real life, he has nothing. Quiet and not very social, Rei has no family, very few friends, and he doesn't go to school. He is acquainted with a neighboring woman named Akari who single-handedly lives and cares for her two younger sisters, Momo and Hinata. It's slice-of-life seinen with strong monologues and reflections by Rei.

This is a wonderful manga, worth looking at for anyone interested an a manga where the character development, dialogue and situation is what holds your interest. The characters are believable and interesting. There is also a hint of something dark in the background of the main character which may be developed later. Just a hint, however. You can't help but emphathise (sp?) with him and the three ladies that have come into his life. These three are also recovering from a family loss but at least have a grandpa left living.
Try it. Only one volume translated so far that I can find. Permalink " "
Review by HARUHI_han

I have read 2 volumes of this so far , and I must say it's such a great slice of life manga as expected from Chica Umino, the author of Honey and Clover
at the age of 17, Rei (also called Zero) has become a professional shogi player, he's famous and lots of the older respect him
but then he has nothing true to his name_zero, no family, no friend , he even does not like shogi much at all , coz he lost his parents and his dear younger sister so he tried to stick to shogi as the last mean of survival,though sarcastically that's the reason why he has lost his second family
However, he's very serious with shogi and each match he entered. But then he can hardly erase his emptiness, as well as the sorrow,the loneliness of a 17 year old boy
Permalink " "