Like us on Facebook, follow us on Twitter! Check out our new tumblr page. :)
Manga News: Toriko has come to an end; but be sure to swing by and share your favourite moments from the series!
Manhwa & Manhua News: Check out the new Manhwa and Manhua shout-out (March 2016).
Event News: One Piece Awardshas concluded. Check the results Here!
MangaHelpers > Manga > Browse > Battleship Girl - Koutetsu Otome
Home
Chapters
Translations
RSS 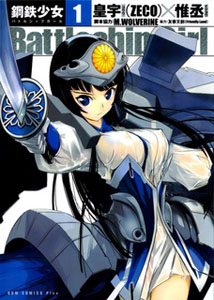 Yukikaze is just a young girl but her and her friends have the incredible responsibility of being the naval force of her nation. As part of Seiran Team 3 of the Wadatsumi naval base, Yukikaze and her female friends, Isokaze, Nowaki and Takao, all attend the naval academy. But in this world, they do not work on ships, instead, they themselves are the weapons, able to travel across oceans at high speeds and engage in warfare using their equipped artillery. When an enemy nation attacks the base to take control of an important strategic point, only Yukikaze is left standing and all hope seems lost when a beautiful woman named Taiwa appears with the secret weapon to defend Yukikaze and the naval base. [vyc]