Like us on Facebook, follow us on Twitter! Check out our new tumblr page. :)
Manga News: Toriko has come to an end; but be sure to swing by and share your favourite moments from the series!
Manhwa & Manhua News: Check out the new Manhwa and Manhua shout-out (March 2016).
Event News: One Piece Awardshas concluded. Check the results Here!
MangaHelpers > Manga > Browse > Blazing Transfer Student
Home
Chapters
Translations
RSS 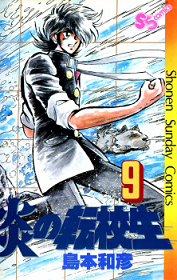 One bright fall day, young Takisawa Noboru transfered to over to Honjakuniku High, arriving an hour after the start of classes as the principal instructed him. Everything seemed to be going fine, until the mildly overzealous hall monitor Jonichi Koichi decides to charge him with tardiness, and administer punishment...see in THIS high school, any argument can be won through sports or combat, leaving Takisawa in a bit of a pinch until the lovely Yukari steps in and saves him from making himself even later than he is. But that`s just the start of Takisawa`s troubles...the school tough, Ibuki Saburo, has set his sights on both mashing the new meat to a pulp, and winning the hand of Yukari away from any potential suitors...in the boxing ring!

Will Takisawa be able to defeat Ibuki, win the love of Yukari, and still make it to Calculus on time?
Of course, it`s all in a day`s work for a Blazing Transfer Student!