Like us on Facebook, follow us on Twitter! Check out our new tumblr page. :)
Manga News: Toriko has come to an end; but be sure to swing by and share your favourite moments from the series!
Manhwa & Manhua News: Check out the new Manhwa and Manhua shout-out (March 2016).
Event News: One Piece Awardshas concluded. Check the results Here!
MangaHelpers > Manga > Browse > Bloomed in Action
Home
Chapters
Translations
RSS 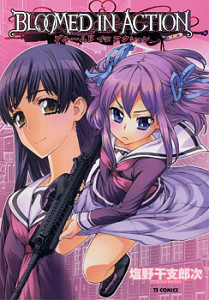 When an enemy explosion leaves private military soldier Terawaki Ryo nearly dead, a secret organization rebuilds his body using the research they have done in human revivals. Unfortunately for him, the technology only allows him to come back in the form of a teenage girl. His new identity, Shibahara Kyoko, leaves him distraught as his frail body doesn’t allow for the combat skills he used to have or even pick up heavy artillery he used in the combat field. Kyoko is assigned to protect a prestigious academy where daughters of powerful leaders attend since the girls’ presence makes it a hotspot for terrorists to attack and blackmail the people in power. Lead by his former commander and mentor, Major Honjo who has also been reborn as Ryo, was a beautiful teenage girl named Chujo Shizuko, and the pair work together as anti-terrorist teenage school girls. [vyc]