Like us on Facebook, follow us on Twitter! Check out our new tumblr page. :)
Manga News: Toriko has come to an end; but be sure to swing by and share your favourite moments from the series!
Manhwa & Manhua News: Check out the new Manhwa and Manhua shout-out (March 2016).
Event News: One Piece Awardshas concluded. Check the results Here!
MangaHelpers > Manga > Browse > Bokuretsu Manken Love Gun
Home
Chapters
Translations
RSS 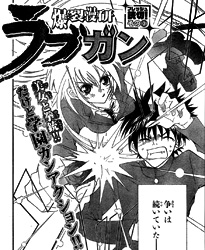 After Oda Nobunaga passed away without declaring a successor, the world once again entered in a battle to determine the next King. 400 years later, the stage of battle moved to a certain School, where the one who reaches the top can earn the title of "Zao"..... A naive otaku who loves manga and anime, Huyuki Souichiro, finds himself stuck in this crazy high school where kids carry weapons and bazookas everyday. To get his mind off of all the insanity, Souichirio tries to seek peace by joining the "Manga Club," but his troubles are far from being over. The "Manga Club," commanded by small-but-terrible Kazuga, turns out to be one of the Big 3 powers of the school. Can Souichiro win Kaguza's recognition and get into his beloved "Manga Club" amidst all this chaos? [ruggia]