Like us on Facebook, follow us on Twitter! Check out our new tumblr page. :)
Manga News: Toriko has come to an end; but be sure to swing by and share your favourite moments from the series!
Manhwa & Manhua News: Check out the new Manhwa and Manhua shout-out (March 2016).
Event News: One Piece Awardshas concluded. Check the results Here!
MangaHelpers > Manga > Browse > Brain Powerd
Home
Chapters
Translations
RSS 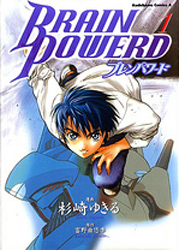 Brain Powerd is set a pseudo-modern era in which the vast majority of the Earth has been afflicted by numerous earthquakes and floods. The source of this is a mysterious, gargantuan alien spacecraft deep within the Pacific known as Orphan. It seeks to reach the Earth's surface and travel the galaxy, which would result in all life-forms on Earth being annihilated. Its agents, known as Reclaimers, pilot living organic mechas or Antibodies known as Grand Cher, and seek to retrieve disc plates scattered on the Earth's surface.

The series begins with Hime Utsumiya, a teenage girl, venturing upon such a disc plate, which 'revived' into a unique, infant Antibody - a Brain Powerd, with which Hime forms a deep connection. She is soon joined by Yū Isami, an ex-Reclaimer who leaves Orphan after learning of the catastrophe it seeks to unleash, and the both of them enter upon an adventure, which may decide the future of humanity.