Like us on Facebook, follow us on Twitter! Check out our new tumblr page. :)
Manga News: Toriko has come to an end; but be sure to swing by and share your favourite moments from the series!
Manhwa & Manhua News: Check out the new Manhwa and Manhua shout-out (March 2016).
Event News: One Piece Awardshas concluded. Check the results Here!
MangaHelpers > Manga > Browse > Bucho Shima Kousaku
Home
Chapters
Translations
RSS 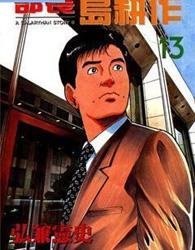 This manga tells of Kousaku Shima, a salaryman who works for Hatsushiba Electronics, and his endevours in climbing the corporate ladder within the organization.

The story revolves around Shima's working life, which intends to depicts the typical life of japanese corporate staff in a huge organization. Shima is dedicated to the company and despite the issues and politics (corporate decisions, retrenchment of staff, business negotiations, etc),he tries to maintain as much humility in his actions as he can. He is shown to gain promotion as years go by, but his personal life is a frenzy as he meets different women and loses control of his daughter with time.

Shima is a reflection of the artist/author; he wanted to describe what he had experienced having once worked for a large multinational electronics company. This was originally a series of different levels, depending on Shima's position in the company. "Bucho" stands for "section chief". As Shima gets promoted, the title changes to suit his 'current' status in the manga.

All in all, even for native Japanese, this manga can be a tough-read. There's a lot of terminology which, if one was not in the field, is quite difficult to understand. However if you'r looking for a glimpse of corporate life and dealings in a Japanese office, this manga might be just for you. [6gatsu]