Like us on Facebook, follow us on Twitter! Check out our new tumblr page. :)
Manga News: Toriko has come to an end; but be sure to swing by and share your favourite moments from the series!
Manhwa & Manhua News: Check out the new Manhwa and Manhua shout-out (March 2016).
Event News: One Piece Awardshas concluded. Check the results Here!
MangaHelpers > Manga > Browse > Capital -read through manga-
Home
Chapters
Translations
RSS 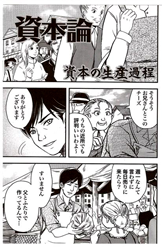 "Around 19 centuries after the industrial revolution happened, it has become possible to supply the bulk of industrial products, widening gap between rich and poor is increasing, people's lives rather than just get harder and harder to get rich. Create new values in the process of labor abuse "exploitation" of the system become clear. A cartoon version of Marx's revolutionary life pulled over to the capitalist." -Amazon Japanese Translation

"Das Kapital (IPA: [das kapiˈtaːl]) (Capital, in the English translation) is an extensive treatise on political economy written in German by Karl Marx and edited in part by Friedrich Engels. The book is a critical analysis of capitalism and its practical economic application and also, in part, a critique of other related theories. Its first volume was published in 1867." -Wiki entry