Like us on Facebook, follow us on Twitter! Check out our new tumblr page. :)
Manga News: Toriko has come to an end; but be sure to swing by and share your favourite moments from the series!
Manhwa & Manhua News: Check out the new Manhwa and Manhua shout-out (March 2016).
Event News: One Piece Awardshas concluded. Check the results Here!
MangaHelpers > Manga > Browse > Carnevale Della Luce Della Luna
Home
Chapters
Translations
RSS 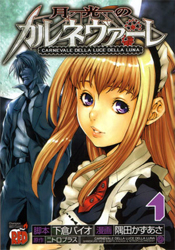 The story takes place in a city resembling Italy, known as Belmonte, with the technology levels resembling levels in the late 19th century. In this city there are human-sized mechanical dolls known as "Automata" who serve the people of the city.

The protagonist, Romeo, is a taxi driver who was originally involved in a organization known as the "Olma Rossa." He finds an automata in the shape of a young woman, who appears to have amnesia. He names her Anna, they start living together. However, sometime later, the Olma Rossa begin to catch up to Romeo, and an organization composed of automata also appears; thus, Romeo must fight to protect his current life.