Like us on Facebook, follow us on Twitter! Check out our new tumblr page. :)
Manga News: Toriko has come to an end; but be sure to swing by and share your favourite moments from the series!
Manhwa & Manhua News: Check out the new Manhwa and Manhua shout-out (March 2016).
Event News: One Piece Awardshas concluded. Check the results Here!
MangaHelpers > Manga > Browse > Chanto Kaitemasu kara!
Home
Chapters
Translations
RSS 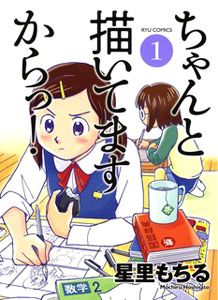 As a manga author of a semi known series, Hirahara Daichi has the talent for coming up with stories, but is incredibly lazy and irresponsible. That leaves his two daughters, middle school student Ayumi and the even younger Sora, to pick up the slack. With the help of the assistant, Akane, the two kids are forced to draw and complete the series every month if they want an income for the household, a task no child should burden themselves with. On top of that, they must do this without people finding out because it will ruin the credibility of Daichi as an author and put a stop to the series. If being a teenager wasn’t hard enough, add to that the pressure of meeting deadlines for a national comic magazine. [vyc]