Like us on Facebook, follow us on Twitter! Check out our new tumblr page. :)
Manga News: Toriko has come to an end; but be sure to swing by and share your favourite moments from the series!
Manhwa & Manhua News: Check out the new Manhwa and Manhua shout-out (March 2016).
Event News: One Piece Awardshas concluded. Check the results Here!
MangaHelpers > Manga > Browse > A Cheeky Angel
Home
Chapters
Translations
RSS 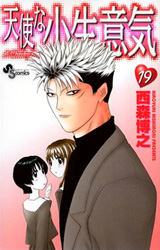 Megumi Amatsuka, a rough and tumble nine-year-old boy, always dreamt of becoming the "manliest man on earth." Upon receiving a book of magic from a sorcerer whom he saved from a group of local thugs, Megumi summons a genie in order to make a wish. But due to a sick twist of fate, the genie turns out to be an evil one, and Megumi winds up being the "womanliest woman on earth"! Six years later, Megumi is the most desirable girl in school, but deep within her hot-mama façade is the same trash-talkin', punk-stompin' boy.