Like us on Facebook, follow us on Twitter! Check out our new tumblr page. :)
Manga News: Toriko has come to an end; but be sure to swing by and share your favourite moments from the series!
Manhwa & Manhua News: Check out the new Manhwa and Manhua shout-out (March 2016).
Event News: One Piece Awardshas concluded. Check the results Here!
MangaHelpers > Manga > Browse > Legendary Kang Do-Young
Home
Chapters
Translations
RSS 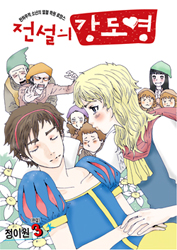 There was a Legend about a guy named Kang Do-Young. He was perfect, he was great at sports, rich plus good at fighting. He is also the current Jiang of the school. And now that guy likes Namire. A girl who is in a club called 'Pink Lady' and that also wants to be Jjang of her whole school. But she wants to fight Do-Young and defeat him so she can be the new Jiang. To bad Kang Do-Young doesn't want to fight since he likes her. What will happen will she ever defeat him and become jiang or..........? [From Fateful Encounters]