Like us on Facebook, follow us on Twitter! Check out our new tumblr page. :)
Manga News: Toriko has come to an end; but be sure to swing by and share your favourite moments from the series!
Manhwa & Manhua News: Check out the new Manhwa and Manhua shout-out (March 2016).
Event News: One Piece Awardshas concluded. Check the results Here!
MangaHelpers > Manga > Browse > B-Shock!
Home
Chapters
Translations
Thread
RSS 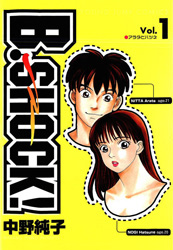 Nitta Arata is a typical 21 year-old junior attending college of science and engineering at Toaru University. He is bright, he's in the engineering program after all, but he definitely is from a working class background. He has been working his way through college for the past 3 years without major incident, so being swept up in a warped experiment of an equally warped professor was the last thing he expected in the second half of his college days.

One day, Arata received a letter asking him to meet someone whose initials were "N.H." at a relatively secluded location on campus. The letter looked suspiciously like a "love letter", but Arata had his doubts. More likely it was a cruel practical joke perpetrated by one of his buddies, especially when the initials matched those belonging to "Nogi Hatsune", also know as "Miss Engineer", the reigning heartthrob of the engineering department. Why would somebody like her be interested in a nobody like himself? The short answer was that she would not be interested, but why take the chance of missing out?

So there was Arata, in ultra-cynical mode, waiting at the appointed location when he was suddenly grabbed from behind! His last thoughts as world turned to black was that the gloved hands covering his mouth and nose reeked of ether...