Like us on Facebook, follow us on Twitter! Check out our new tumblr page. :)
Manga News: Toriko has come to an end; but be sure to swing by and share your favourite moments from the series!
Manhwa & Manhua News: Check out the new Manhwa and Manhua shout-out (March 2016).
Event News: One Piece Awardshas concluded. Check the results Here!
MangaHelpers > Manga > Browse > Chokotto Sister
Home
Chapters
Translations
RSS 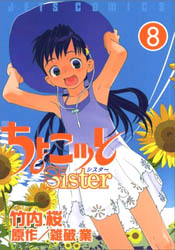 As a child, Kawagoe Haruma eagerly awaited the birth of his little sister. However, his mother had a miscarriage, followed by an operation that left her unable to bear children. That Christmas, Haruma made his Christmas wish. It was a wish so innocent and heartfelt that it was accepted instantly, unbeknownst to him.

Many years later, on Christmas morning, college student Haruma is awoken by a woman riding a hovering motorcycle and claiming to be Santa Claus. She throws him a bag, and he opens it to find his new little sister!

Complaining to Santa Claus that he made this wish a long time ago, she tells him that it takes much longer for a sister than it does a toy car. After naming her Choko because of the Anchoko (mini-guidebook) she carries around, they begin their new life as brother and sister in a crazy apartment building filled with interesting neighbors.