Like us on Facebook, follow us on Twitter! Check out our new tumblr page. :)
Manga News: Toriko has come to an end; but be sure to swing by and share your favourite moments from the series!
Manhwa & Manhua News: Check out the new Manhwa and Manhua shout-out (March 2016).
Event News: One Piece Awardshas concluded. Check the results Here!
MangaHelpers > Manga > Browse > Cocoa no Kekkon: Internet Marriage
Home
Chapters
Translations
RSS 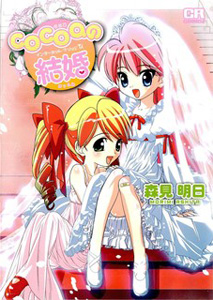 Cocoa is only a child but she knows without a doubt that she wants to be married and married now. However, since she doesn’t even have a boyfriend nor is she legally able to marry, she does the next best thing and finds herself a cyber husband. She uses a cell phone multiplayer game called Agartha to create a character and gets married to a tall gentlemen who goes by the name John Smith. They talk everyday and try to do everything that a married couple would do, like go on dates in the world of Agartha. [vyc]