Like us on Facebook, follow us on Twitter! Check out our new tumblr page. :)
Manga News: Toriko has come to an end; but be sure to swing by and share your favourite moments from the series!
Manhwa & Manhua News: Check out the new Manhwa and Manhua shout-out (March 2016).
Event News: One Piece Awardshas concluded. Check the results Here!
MangaHelpers > Manga > Browse > Concordia Shima no Mamoribito
Home
Chapters
Translations
RSS 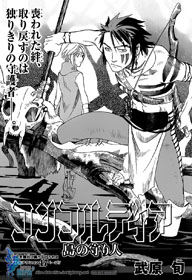 Ten years ago, an explorer named Claude came to an island. He was welcomed there by the native people, and he soon brought more people from his homeland. Tragically, the native population was then destroyed by an epidemic. Claude and the other foreigners also died soon after, although the details of their fate was unclear. Even now, curious travelers who wander onto the island go missing. Rumor has it that the cursed island is now plagued by demonic creatures.

Claude's little sister, Leda, has now come to investigate the final destination of her beloved brother. Led by Zeo, the only native survivor of the tragic incident, she hopes to uncover the truth about what happened and what is still happening on this mysterious island! [tethysdust]