Like us on Facebook, follow us on Twitter! Check out our new tumblr page. :)
Manga News: Toriko has come to an end; but be sure to swing by and share your favourite moments from the series!
Manhwa & Manhua News: Check out the new Manhwa and Manhua shout-out (March 2016).
Event News: One Piece Awardshas concluded. Check the results Here!
MangaHelpers > Manga > Browse > Cross and Crime
Home
Chapters
Translations
RSS 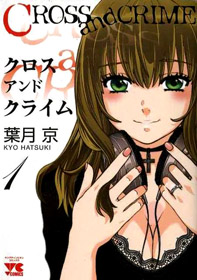 Tokano Yuuka has been going out with her boyfriend Yazaki Norikazu for a little over a year now but doesn’t get to see him everyday since he works in a different city as a newspaper writer. Although they are apart, they love each other and things are going well. Norikazu gets an opportunity to interview Saeki Keito, the lead singer of the most popular band in Japan, Zero Sum Game, because they were good friends in high school. Being a fan of the band, Yuuka gets to tag along. However, Yuuka soon finds herself being raped by the members of the band while Keito distracts Norikazu because it seems that Keito has an obsession with him. After the traumatic event, the relationship between the three becomes extremely complicated. [vyc]