Like us on Facebook, follow us on Twitter! Check out our new tumblr page. :)
Manga News: Toriko has come to an end; but be sure to swing by and share your favourite moments from the series!
Manhwa & Manhua News: Check out the new Manhwa and Manhua shout-out (March 2016).
Event News: One Piece Awardshas concluded. Check the results Here!
MangaHelpers > Manga > Browse > Cross Manage
Home
Chapters
Translations
RSS 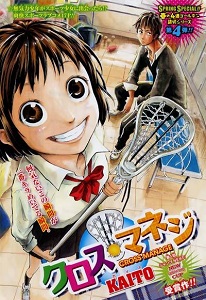 "Hard working" or "passionate" was not in Sakurai’s vocabulary and joining a team sports in school was out of the question. But one day, he accidentally walks in on his female classmate Toyoguchi naked in the locker room and in return for keeping it a secret from everyone else, he is forced to become the manager for the female lacrosse team. Toyoguchi is passionate about lacrosse and was responsible for creating the team for the school. Sakurai reluctantly begins his role as manager but is slowly drawn into Toyoguchi’s personality and begins researching and enjoying the sport. The once lazy Sakurai who was scared of failure now learns to put himself out there and put serious effort into something worthwhile. [vyc]