Like us on Facebook, follow us on Twitter! Check out our new tumblr page. :)
Manga News: Toriko has come to an end; but be sure to swing by and share your favourite moments from the series!
Manhwa & Manhua News: Check out the new Manhwa and Manhua shout-out (March 2016).
Event News: One Piece Awardshas concluded. Check the results Here!
MangaHelpers > Manga > Browse > Crow
Home
Chapters
Translations
RSS 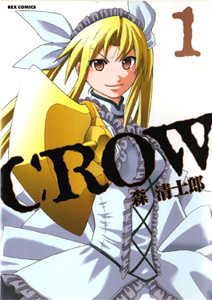 Sakuraba Aeris literally drops in from the sky and saves Karasuma Crow from being attacked by a black monster at his high school. Aeris explains that those monsters are called Ravens who hunt those who have large amounts of “flaps,” an aura-like power. Aeris herself is a “Luke” who solidifies her flaps to create a weapon to fight and destroy Ravens. Crow accidentally breaks the trinket that lets Aeris transform, but finds out that his aura has the same ability as the trinket and Aeris can defeat Ravens with the help of Crow. Now that they have to stay next to each other if they want to defend themselves from Ravens, Aeris has to move in to Crow’s house! [vyc]