Like us on Facebook, follow us on Twitter! Check out our new tumblr page. :)
Manga News: Toriko has come to an end; but be sure to swing by and share your favourite moments from the series!
Manhwa & Manhua News: Check out the new Manhwa and Manhua shout-out (March 2016).
Event News: One Piece Awardshas concluded. Check the results Here!
MangaHelpers > Manga > Browse > Daitokai Ni Hoero
Home
Chapters
Translations
RSS 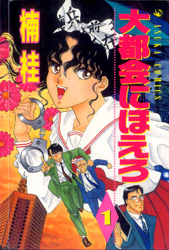 Monsters roam the busy city streets and kill humans to eat. Detectives are the hunters that track down and kill these beasts. The central branch of the police department receives a girl from the US’s FBI’s specialty department. That girl, nicknamed “The G-Man,” is trained to deal with monsters and teams up with the central branch’s most enthusiastic guy who believes in the idealistic views of what being a policeman entails. Will these two be able to get along well enough to defeat the two head four-eyed one tailed monster? [Kohakuboshi]