Like us on Facebook, follow us on Twitter! Check out our new tumblr page. :)
Manga News: Toriko has come to an end; but be sure to swing by and share your favourite moments from the series!
Manhwa & Manhua News: Check out the new Manhwa and Manhua shout-out (March 2016).
Event News: One Piece Awardshas concluded. Check the results Here!
MangaHelpers > Manga > Browse > Dandelion
Home
Chapters
Translations
RSS 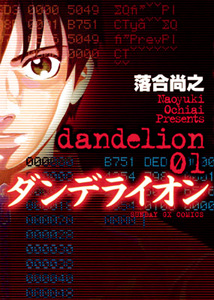 Detective Hyougo Masatada of the Cyber Crimes Division has been in a slump since moving to the high tech side of police work. He seeks the help from Misasagi Net Surveillance Co., a well known hacker company, only to find out it is run by only two people, a young woman, Misasagi Kanade, and teenager, Daigo Yukihito. The two young hackers prove their skills to Hyougo who becomes more involved in the real project Kanade and Yukihito are working on.

File-D, aka Dandelion, a myth even in the hacker community, is a program that exists somewhere on the internet and is said to make anyone who finds it the king of hackers. But when Yukihito cracks the Dandelion website, the program downloaded into his brain, revealing itself when he becomes emotionally unstable. It turns him into a violent, powerful human weapon that has no regard for anyone, friend or foe, and the team must find the truth behind Dandelion before it is too late. [vyc]