Like us on Facebook, follow us on Twitter! Check out our new tumblr page. :)
Manga News: Toriko has come to an end; but be sure to swing by and share your favourite moments from the series!
Manhwa & Manhua News: Check out the new Manhwa and Manhua shout-out (March 2016).
Event News: One Piece Awardshas concluded. Check the results Here!
MangaHelpers > Manga > Browse > Dark Mage
Home
Chapters
Translations
Thread
RSS 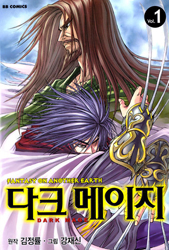 Once... Humans and Orcs peacefully co-existed, but at some point humans got greedy and started a war claiming the Orcs' territory. The diety-Lord who created all, got angry with the humans' greed and decided to punish them with 3 catastrophes. One of them was the "Dragons", divine creatures blessed with magic capable of doing almost anything. Now the Orcs, with a "Dragon" by their side, seem to have the upper hand. Will humans just sit back and see their land get destroyed? They are too devious for that... Their only good plan at that point is to abduct a "Dragon" to even things up. But how are they going to manage the capture of a being with so much power?