Like us on Facebook, follow us on Twitter! Check out our new tumblr page. :)
Manga News: Toriko has come to an end; but be sure to swing by and share your favourite moments from the series!
Manhwa & Manhua News: Check out the new Manhwa and Manhua shout-out (March 2016).
Event News: One Piece Awardshas concluded. Check the results Here!
MangaHelpers > Manga > Browse > Aiki
Home
Chapters
Translations
RSS 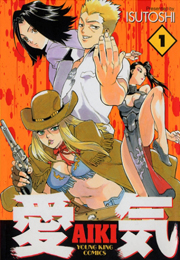 There are fighting’s ongoing at a high school due to a power struggle for the control. A beautiful young girl, the granddaughter of the director, requests help by a tough silly young man renowned for his genius fighting style. At the same time other beautiful girls appear from the same high school, who want him as well as teacher. Will he help and if so, which side will he choose to support? Or will he just show his true face with his bad boy ways? Like Tenjou Tenge but with lost more humor and wackiness!

If you feel bored with the typical plot of fighting-mangas, then this manga is the right thing for you. The protagonist alone makes this manga special. He is not the typical "defender of justice" like in many other mangas, he is on the contrary a very wicked person.

And I'm sure that you must know this kind of pattern:
1. A fights against B
2. A overwhelms B
3. B says that he/she isn't being serious yet
4. B is being serious and beats the crap out of A
5. Despite of being kicked, punched, stabbed and so many other things, A doesn't die. Oh yes, he can't die. He keeps standing, having faith in justice and love
6. Suddenly, A is filled with the power of justice/love and one puny hit finishes B off.

There is no such thing mentioned above in AIKI. The rule in this manga is "the strong wins, the weak loses". This manga is also filled with lot of jokes, one of the best indeed. Permalink " "
Review by elpato237

This one is great, it's hilarious, if you like martial arts, girl's fight, and an evil protagonist as a main character then you'll enjoy this one. Permalink " "
Review by Cococrash11

Its really good but the art is kind strange but still good. Permalink " "