Like us on Facebook, follow us on Twitter! Check out our new tumblr page. :)
Manga News: Toriko has come to an end; but be sure to swing by and share your favourite moments from the series!
Manhwa & Manhua News: Check out the new Manhwa and Manhua shout-out (March 2016).
Event News: One Piece Awardshas concluded. Check the results Here!
MangaHelpers > Manga > Browse > Death/Communication
Home
Chapters
Translations
RSS 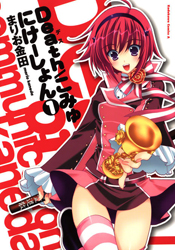 Inomae (Ico) is a tom-boyish girl who recently transferred to the Saint Stella School. Her new roommates, Shitanaga (Nico) and Shinomae (Mico) are just the kind of girl Ico wants to surround herself with to become more girlish. Ico soon learns from her classmates about a rumored object called the Karisu that grants wishes. It was originally stored in an abandoned church on campus but recently, it has been stolen, much to Ico’s dismay. The three roommates go to the church to investigate the missing object where they meet 2 mysterious figures Siren and Reverse Cross who have the Karisu. However, they escape before the girls have a chance to question them.

Who are these mysterious figures that stole the wish granting Karisu? Who is Ico’s best friend Azuma, who is hospitalized? What is the connection between Ico’s search for the Karisu and her relationship with Azuma? Find out more by reading Death Communication. [vyc]