Like us on Facebook, follow us on Twitter! Check out our new tumblr page. :)
Manga News: Toriko has come to an end; but be sure to swing by and share your favourite moments from the series!
Manhwa & Manhua News: Check out the new Manhwa and Manhua shout-out (March 2016).
Event News: One Piece Awardshas concluded. Check the results Here!
MangaHelpers > Manga > Browse > Diadem
Home
Chapters
Translations
RSS 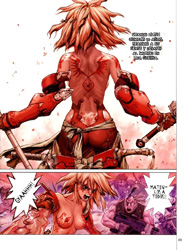 "Freedom is flowing in your heart. Even should your flesh be torn... Even in death, you must fight. If you do this, someday, 'The Goddess of North Wind' will grant you freedom." with these last words of her father engraved in her heart, a young Lilith led people in a war against the Empire. In the hope that 'The Goddess of North Wind' will one day save them from the Empire, the Lilith continues to fight against the cruel and mighty Empire. Can Lilith and her people gain true Freedom?
A short oneshot by Boichi, creator of Present and Hotel. [ruggia]

Diadem is about Lilith, a young lady whose father dies in a rebellion against an evil empire. She carries on her father’s war to the best of her abilities, being more brutal and more violent than the empire ever could be in her quest to destroy them. She does this believing that the Goddess of the North Wind will come and save everyone, setting them all free. [Zindryr]