Like us on Facebook, follow us on Twitter! Check out our new tumblr page. :)
Manga News: Toriko has come to an end; but be sure to swing by and share your favourite moments from the series!
Manhwa & Manhua News: Check out the new Manhwa and Manhua shout-out (March 2016).
Event News: One Piece Awardshas concluded. Check the results Here!
MangaHelpers > Manga > Browse > Meteo Emblem
Home
Chapters
Translations
RSS 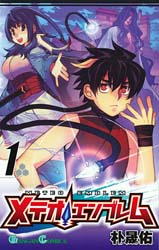 Long ago...In a very distant past...It is said that civilization had developed to high degrees, and its people spent peaceful and plentiful days without an inconvenience..The people thought their peaceful and tranquil lives would continue forever.
But...On that day when the 「stars」 fell from the skies...Legend tells us that all civilization on earth announced its end...And perished in an instant...

However...The stars that fell on 「that day」 did not merely bring about destruction to earth...In the flowing long months and days...The mysterious powers possessed by the stars gave a new potential to people
That possibility...Was a 「new mankind」 who were gifted with power from the stars...From the day the new mankind became aware of the mysterious power attained from the stars... it started its research on the usage of the 「power」. This is the raising of the curtain of the era of a new civilization by the 「power of the stars」, Meteo Civilization.

Along with the birth of a new era, the power of the stars that surpassed mankind and transcends everything...Meaning a new star, the people started to call it 「Nova」