Like us on Facebook, follow us on Twitter! Check out our new tumblr page. :)
Manga News: Toriko has come to an end; but be sure to swing by and share your favourite moments from the series!
Manhwa & Manhua News: Check out the new Manhwa and Manhua shout-out (March 2016).
Event News: One Piece Awardshas concluded. Check the results Here!
MangaHelpers > Manga > Browse > Darker Than Black - Shikkoku no Hana -
Home
Chapters
Translations
RSS

Darker Than Black - Shikkoku no Hana - 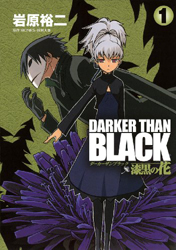 In Tokyo, an impenetrable field known as "Hell's Gate" appeared ten years ago. At the same time, psychics who wield paranormal powers at the cost of their conscience also emerged. After destroying the "Saturn's Ring," Hei and Yin are on the run, with most of the world as their enemies. But running isn't the only thing they are doing. Hei is hunting down the contractor of the dark flowers, named "Harvest", who is threatening the balance between humans and contractors.
Can Hei kill "Harvest" and prevent chaos?

This story takes place right after the events of the first season of the anime, Darker than Black - Kuro no Keiyakusha. [ruggia]