Like us on Facebook, follow us on Twitter! Check out our new tumblr page. :)
Manga News: Toriko has come to an end; but be sure to swing by and share your favourite moments from the series!
Manhwa & Manhua News: Check out the new Manhwa and Manhua shout-out (March 2016).
Event News: One Piece Awardshas concluded. Check the results Here!
MangaHelpers > Manga > Browse > Digimortal
Home
Chapters
Translations
RSS 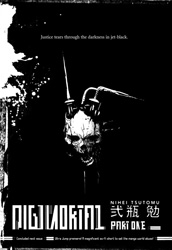 A megaconglomerate called "The church of transfiguration" monopolized the excavation of the ancient crafts and set up a virtual world government. Religiously devoted to technology, they promoted extreme cybernetic modification of the human body.

Prior to the great ruin, civilization had created wonders such as immortality through genetic engineering. The church formed an inquisition system to track down and punish those who possessed traces of this manipulation.