Like us on Facebook, follow us on Twitter! Check out our new tumblr page. :)
Manga News: Toriko has come to an end; but be sure to swing by and share your favourite moments from the series!
Manhwa & Manhua News: Check out the new Manhwa and Manhua shout-out (March 2016).
Event News: One Piece Awardshas concluded. Check the results Here!
MangaHelpers > Manga > Browse > BioMega
Home
Chapters
Translations
RSS 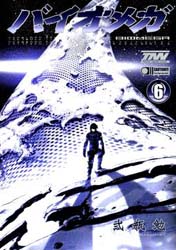 Tsutomu Nihei returns with another addictive manga (see BLAME!), set in the not-so-distant future (3005 A.D.). It follows a character by the name of Kanoe Zouichi and the mysterious Kanoe Fuyu whose luminous form is integrated into the system of his bike. They are agents sent by a powerful organization to retrieve the human with the ability to resist and transmute the NS5 infection that is spreading across the world, named Yion/Ion Green.

However, their mission is delayed by the reckless actions of the Public Health Department's taskforce and the kidnapping of Yion/Ion Green. Will they complete their mission? Where has Yion/Ion Green been taken? These questions will only be answered as more volumes are released.

The art in BioMega is similar to BLAME!, with its complicated concrete sprawl and ludicrously wide, empty spaces. However, things seem to happen at a more reasonable pace. In this manga, there is emphasis on the swiftness of the attacks made by Zouichi, such as the gun being sheathed just before the enemies fall to the ground. Speed is crucial in this manga, unlike in BLAME!, and the plot develops just as quickly. An interesting read, especially if one has enjoyed BLAME!

Somebody have maybe BioMega Interlink on RAW version??? Permalink " "
Review by Asrodeia

I would say 1000 years is pretty distant..... but yeah, this is typical of Nihei Tsutomu, don't get your hopes up for a conclusive ending. Permalink " "