Like us on Facebook, follow us on Twitter! Check out our new tumblr page. :)
Manga News: Toriko has come to an end; but be sure to swing by and share your favourite moments from the series!
Manhwa & Manhua News: Check out the new Manhwa and Manhua shout-out (March 2016).
Event News: One Piece Awardshas concluded. Check the results Here!
MangaHelpers > Manga > Browse > Break Blade
Home
Chapters
Translations
Thread
RSS 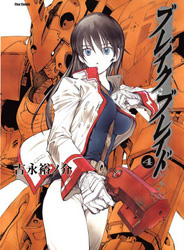 Which to choose, the country or my friend--!? The "Continent of Cruzon", a world where people are born with magic. Lygatto, one of the rare people "without magic" in this world, is getting swallowed up in the whirlpool of a massive war. With Lygatto as the core, four close friends are connected by cruel fate in a spectacular war tale!!!

In the continent of Cruzon, an impending war between the Kingdom of Krishna and the nation of Athens is brimming. The people of this land are able to wield the crystals from the ground for whatever purpose they desire. Yet one person, Lygatto Arrow, is not. He is an "un-sorcerer", a person unable to wield the crystals. But this characteristic will enable him to pilot an ancient mecha, one strong enough to put up a fight against the invading army of Athens.

I really like this plot, at least in my opinion, so I'm anxiously waiting for the next chapter to come out. Permalink " "
Review by devil761991

awesome manga got so much potential Permalink " "
Review by Sena

I like this manga a lot, thanks for the work you have been doing and keep up. Permalink " "