Like us on Facebook, follow us on Twitter! Check out our new tumblr page. :)
Manga News: Toriko has come to an end; but be sure to swing by and share your favourite moments from the series!
Manhwa & Manhua News: Check out the new Manhwa and Manhua shout-out (March 2016).
Event News: One Piece Awardshas concluded. Check the results Here!
MangaHelpers > Manga > Browse > Donten・Prism・Solar Car
Home
Chapters
Translations
Thread
RSS 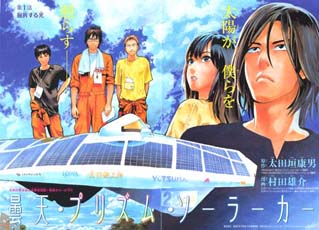 When 10-year-old Kaneda Shota was involved in a car accident that claimed the life of his father, it changed the course of his life forever. Even though his mother got a job and tried her best to support her son, money was always tight. Now, unable to afford college, Shota works a part-time job, in addition to his full-time job at his uncle's factory. He dreams of one day saving enough money to go to college. He lives alone, on the second floor of one of his uncle's warehouses, and doesn't have any friends. Everywhere he goes, he rides a bicycle, with headphones to block out the flashback-inducing sounds of the cars.

His quiet way of life is about to be interrupted. Due to pressures from the economy, Shota's job at his uncle's factory is going to be cut to half-time/half-pay for a while. In addition, Shota's uncle has agreed to lend the first floor of Shota's warehouse to a college club. This club is building a solar car to enter in a race, and they're hoping to get Shota to lend them his mechanical expertise. Will Yazaki Junko and the other club members be able to handle Shota's anger and bitterness, and draw him out of his self-imposed isolation? [tethysdust]