Like us on Facebook, follow us on Twitter! Check out our new tumblr page. :)
Manga News: Toriko has come to an end; but be sure to swing by and share your favourite moments from the series!
Manhwa & Manhua News: Check out the new Manhwa and Manhua shout-out (March 2016).
Event News: One Piece Awardshas concluded. Check the results Here!
MangaHelpers > Manga > Browse > Dotou! Jamuka no Daibouken
Home
Chapters
Translations
RSS 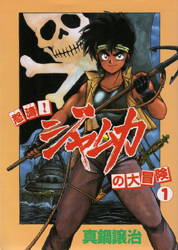 Jamuka and his gang of pirates rule the seas as they plunder and destroy everything in their path. They run into a small ship that comes from a country conquered by the Japanese Empire. Jamuka easily captures this ship and takes the princess that was aboard as hostage. The princess asks for Jamuka's help in fighting the Japanese Empire in exchange for her body, but the rest of his crew is not quite up for a fight against this powerful enemy. With the help of Jamuka and his ship, will the princess be able to save her country? [DrCoke]

As a pirate ship captain, Jamuka was living the good life, surrounded by plenty of treasure, food and alcohol. However, one fateful day, his ship attacked the transportation of the beautiful Princess Kana. Kana was on a journey to seek help for her homeland, the small island country of Wa, which was under attack. Her plan was stopped short when Jamuka sunk her ship and took both Kana and her bodyguard Kagura as prisoners. But Princess Kana won't give up that easily! If Jamuka's band of pirates is the only force she has access to, she's going to do whatever it takes to convince them to save her home! Luckily, Jamuka requires very little persuading when it comes to beautiful women offering him whatever he wants. But will he be able to convince his crew to follow him into such danger? Jamuka's big adventure is about to begin! [tethysdust]