Like us on Facebook, follow us on Twitter! Check out our new tumblr page. :)
Manga News: Toriko has come to an end; but be sure to swing by and share your favourite moments from the series!
Manhwa & Manhua News: Check out the new Manhwa and Manhua shout-out (March 2016).
Event News: One Piece Awardshas concluded. Check the results Here!
MangaHelpers > Manga > Browse > Gallery Fake
Home
Chapters
Translations
RSS 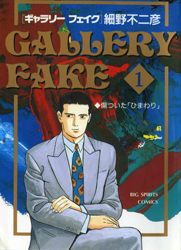 On a wharf on Tokyo Bay is a small gallery named Gallery Fake. The owner of the gallery, Reiji Fujita, was once a curator at the Metropolitan Museum of Art in New York. He was a learned curator with remarkable memory, keen aesthetic sense, great skill in restoration of paintings and knowledge of many languages, so he was called the "Professor." However, because of trouble in the workplace, Fujita was forced to quit the museum. Now he is an art dealer who sells paintings, authentic and fake alike, at extraordinary prices. His motto is "One without aesthetic sense can't help being cheated out of his money. And by being deceived, one may learn to distinguish real ones from the counterfeit."

However, Fujita is not a villain. He truly appreciates art and the artists who spent their lives to create it. He is not someone who just earns money by selling fake paintings. Sometimes he takes paintings from a wicked politician who considers art only as a means of exchanging bribes. Sometimes he tries to restore destroyed paintings. He often touches the lives of those he encounters and people are attracted to him in spite of himself.