Like us on Facebook, follow us on Twitter! Check out our new tumblr page. :)
Manga News: Toriko has come to an end; but be sure to swing by and share your favourite moments from the series!
Manhwa & Manhua News: Check out the new Manhwa and Manhua shout-out (March 2016).
Event News: One Piece Awardshas concluded. Check the results Here!
MangaHelpers > Manga > Browse > Billy Bat
Home
Chapters
Translations
Thread
RSS 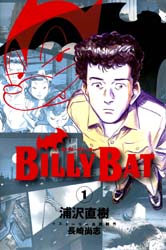 Billy Bat is a comic-in-a-comic and the real protagonist is a Japanese-American artist named Kevin Yamagata who draws Billy Bat for "Marble Comics".

Shortly after they transition to the artist in his studio with his assistant, two actual detectives, who look like Laurel and Hardy in Dick Tracy era suits and trench coats, knock on the door and appropriate Kevin's room for the purpose of conducting surveillance on a room in an adjacent building. One of the detectives, the skinny “Laurel”, sees Kevin's work and it turns out he's a Billy Bat fan. The other chubby "Hardy" detective picks up a page and says that the characters look familiar and accuses Kevin of translating an old "Jap" comic.

As Hardy remembers the comic he thinks Kevin is ripping off, we make another Urasawaesque time jump to 1949 Tokyo and the chapter ends. [The Eastern Edge blog by gottsu-iiyan]