Like us on Facebook, follow us on Twitter! Check out our new tumblr page. :)
Manga News: Toriko has come to an end; but be sure to swing by and share your favourite moments from the series!
Manhwa & Manhua News: Check out the new Manhwa and Manhua shout-out (March 2016).
Event News: One Piece Awardshas concluded. Check the results Here!
MangaHelpers > Manga > Browse > Vinland Saga
Home
Chapters
Translations
Forums
RSS 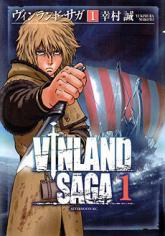 Thorfinn is son to one of the Viking's greatest warriors, but when his father is killed in battle by the mercenary leader Askeladd, he swears his intent to have revenge. Thorfinn joins Askeladd's group in order to challenge him to a duel, and ends up caught in the middle of a war for the crown of England.

Vinland Saga is clearly a surprising manga. We can't see lots of manga about Vikings.
This historic manga is quite accurate, the author Yukimura (author of Planetes) fills the gap left by History by his own imagination. It ended to a consistent and interesting plot. The story is a subtle mix of strategic and political issues and impressive battles. The characters are pretty well detailed and the overall design is elegent and finely worked.
Permalink " "
Review by Nehszriah

I know the word "epic" gets thrown around these days more than it should, but this is a case where one absolutely HAS to make the exception and agree that this is an epic series in both the literal and slang senses.

The term "Vinland saga" refers to the historical folk tales of Icelandic heroes, such as Lief Eriksson and the Vikings. These stories are looked at as some of the most accurate historical accounts from the early European histories and are backed by the relatively recent discovery of a Viking settlement in Canada. They do leave gaps, however, which is where Yukimura Makoto (of Planetes fame) and creative licensing comes in.

Thorfinn Karlsefni is a fierce teenage warrior who travels around with the band of Viking mercenaries led by the much-older Askeladd. The two share a hate-apathetic relationship that began eleven years ago upon their first meeting. Canute is the second son of the Danish king Harold Bluetooth, the same age as Thorfinn, slightly built, soft-spoken and girlish-looking. Thorkell the Tall is a member of the legendary Jomsviking tribe with an interesting connection to young Thorfinn. These four paths cross in intriguing ways and lead towards the engaging plot and even more interesting characters. Many of the characters have actual historical and folklore counterparts they were based off of, including the four previously mentioned.

Originally published as a shounen manga, Vinland Saga takes a considerable art shift once the switch to a monthly seinen manga is made. The story fleshes out well, encompassing Thorfinn's childhood in Iceland to his adventures with Askeladd's band in the Danish invasion of England in the early eleventh century. Throughout the story, there is everything from massive, gory battles to sensitive political bartering and far-thinking philosophy. It travels further and further from the shounen roots the longer it is in syndication though, making it a sure-fire seinen by later chapters.

The only qualm that can be truly argued about Vinland Saga is the distinct lack of strong female figures (yes, this means Canute does not count as a girl). One can count the number of females that have ever been prominently shown as being important on one hand, which can possibly upset female readers if the massive amounts of blood has not gotten to them already. The story is not over, however, leaving plenty of room for the author to work in a strong female character (or reintroduce Thorfinn's sister Ylfa, who was popular enough to become the subject of an independent gag manga).

All in all, the manga surely delivers an exciting ride. The battle scenes are fought by realistic humans instead of superhuman gods (though they still function as peak-performance athletes), the setting is believable, the characters are functional and the plot ties together nicely. It is definitely a manga worth looking into. Permalink " "
Review by chahan

This is a very strong work. I have never heard of Vinland Saga or Yukimura before, I'm glad I come across it. I was skeptical when I started to read it, but I became hooked.
I like how this story doesn't limit itself with single protagonist, and its characters have psychologically interesting relationships with one another. The story develops with three complex characters with intriguing past, as their fate pulls them into political turmoil of Viking era England. The plot and texts are well thought out, and the art complements the concept well. I also like how this series doesn't glorify or sanitize violence and war, it feels heavy and gruesomely human.

I do agree with the previous reviewer on lack of strong female character so far, but it doesn't bother me too much. (and I'm a female!) Because I'd assume there was strong division of labor based on gender in that time period, especially when it came to military. It has not detract from the work in my view. In my personal opinion, not all male authors are good at developing female characters, so it may have been a right decision to not to waste energy on female characters if it can't be done appropriately.
Speaking of female characters in this series, despite the smallness of her role, I liked the nameless girl (I may just not remembering her name) who survived the massacre of her village because she was out admiring the ring that she stole in hiding. Her psychological relationship with god/religion was very interesting. (which is almost like love and hate, and confusion)
I appreciate attention to subtle small drama like that, it makes the world of Vinland Saga much more convincing. I look forward to reading how this story will develop. Permalink " "
Review by erwin2210