Like us on Facebook, follow us on Twitter! Check out our new tumblr page. :)
Manga News: Toriko has come to an end; but be sure to swing by and share your favourite moments from the series!
Manhwa & Manhua News: Check out the new Manhwa and Manhua shout-out (March 2016).
Event News: One Piece Awardshas concluded. Check the results Here!
MangaHelpers > Manga > Browse > Gazer
Home
Chapters
Translations
RSS 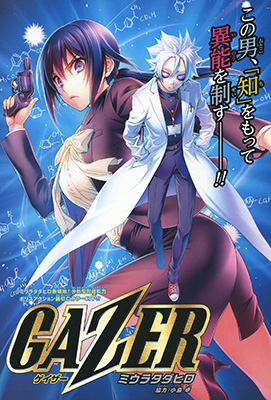 There have been recurring deaths from the sudden explosion of human beings, and the telepathic Kirisaki Satori has 'overheard' the identity of the killer! However, the police don't believe in supernatural abilities so they send her over to the "Occult Division." This division is in the charge of a 14-year-old boy named Araya Shiki, who at least believes her claims. The two of them must track down the dangerous killer, without falling prey to his deadly supernatural ability! [tethysdust]